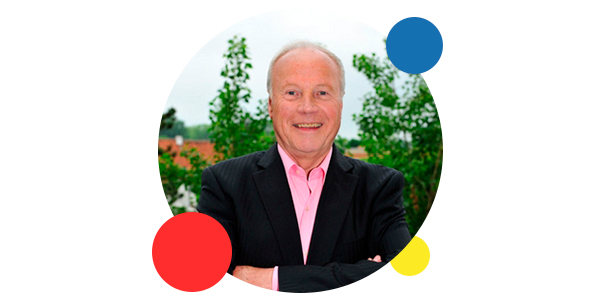 Our ambassador in the Flemish region is Marc Dex, a well-known singer in Flanders who won the Canzonissima radio contest in 1967 with his song "O clown".

Free translation of the biography of Marc DEX. Born in Retie March 3, 1943, Marcel DECKX his real name, is the son of a singer mom and a comedian dad. He grew up in Kempen in a family of six children. His dad works hard during the day at the factory and at his modest farm in the evening. Principles are honored and the will of the father is law. After primary school, Marc enters the professional school of Turnhout, because at this time learning a good job is important, and he graduated A3 in electricity. He starts the music at the KAJ because there is a drums and quickly builds a small orchestra that very quickly occurs at various parties and weddings. Marc is spotted by military commander Van Herck during a performance with his band for the Retie fanfare. The commander, who during his free time is active in the showbiz, puts him in contact with Louis Van Rijmenant. It follows a first single, "Vaarwel Jenny" (Goodbye Jenny), which gets a great local success. Van Rijmenant and Van Herck see things bigger and propel the young man out of his Kempen in the 1967 Canzonissima televised singing competition, which takes place with a large orchestra under the direction of Francis Bay. Marc sings three songs including "O Clown" in the final. The jury finds the performance very bad but the Flemish public does not agree, for him a new idol was born. Marc then begins an impressive series of hits, chaining performances. In 1970, he obtained his own radio program on Radio Limbourg under the title "Marc groet 's avonds of mensen" (Marc greets people in the evening). On June 27, 1971, he marries Maria Staes with whom he has three children: Tom, Barbara and Nathalie. In 1982, Marc started his business in the Horeca "Klaven drie" (Three Clubs Clover), where he invited young artists to perform on the "Vrije podium" (free stage). His initiative sees grow some talents including Margriet Hermans, Dominique, his daughter Barbara and the brothers Bjorn and Joeri. In 1989, he opened his own office and took care of more and more production. At the end of 1992, he released a compilation on CD of his own songs and of course his successes, under the title "Marc Dex - Liedjes van vroeger en nu" (Marc Dex songs from before and now), just after the release of the double album "Mijn Hart & Ziel" (My Heart and Soul), a selection of 45 songs representative of the evolution of his career between 1967 and 2000, with his great hits and new releases, songs in which he participated body and soul as singer, composer or author. On November 2, 2008, he gave two concerts with great success in his native village Retie, where he presented his new album "Marc Dex - 65 jaar Herinneringen" (Marc Dex - 65 years of memories). On December 3, 2009, he was invited with the whole Dex family by Radio 2 and SABAM to the Ostend Casino where the song "O clown" was recorded and immortalized in the Eregalerij (Hall of Honor). At the end of 2010, he released a new single "De seniorendans" ("Senior Dance"), a joyful song that invites everyone to dance and which is very successful in various dance clubs for seniors. From January 25 to 27, 2011, Marc is guest of honor at Casino Kursaal Ostend for 3 unforgettable shows: 2000 people, the accompaniment by an impressive orchestra Lou Roman and the presence of many fellow artists. Honor to who deserves it, with a very beautiful broadcast in the show "De Rode Loper" on TV1. In 2011 and 2012 there will be a successful theatrical tour of the Cultural Centers in Flanders, on the history of Canzonissima, with Andrea Croonenberghs, the jazzman Jan Mues and some famous musicians like Bas Bulteel, Eric Rits and Frank Stoffelen. March 3, 2013, Marc is celebrating his 70th birthday and that of course can not go unnoticed. For this reason, he recorded two new songs in a production of Johan Debacker and Bert Candries. First there is the single "Tot het overgaat", which has a lot of attention on Radio 2 and then a birthday concert "Marc Dex 70 from Canzonissima to today", with among others Andrea Croonenberghs, his daughter Barbara, brother Juul Kabas and his colleague Johan Stollz. Although he is no longer present in the current charts, Marc Dex still goes on tour with a permanent company that has a lot of success in Flanders. "The blood is thicker than the water ..." Marc remains a sure value of Flemish showbiz, not only for what he brings as an artist and what he has achieved, but also for his commitment to young talents.