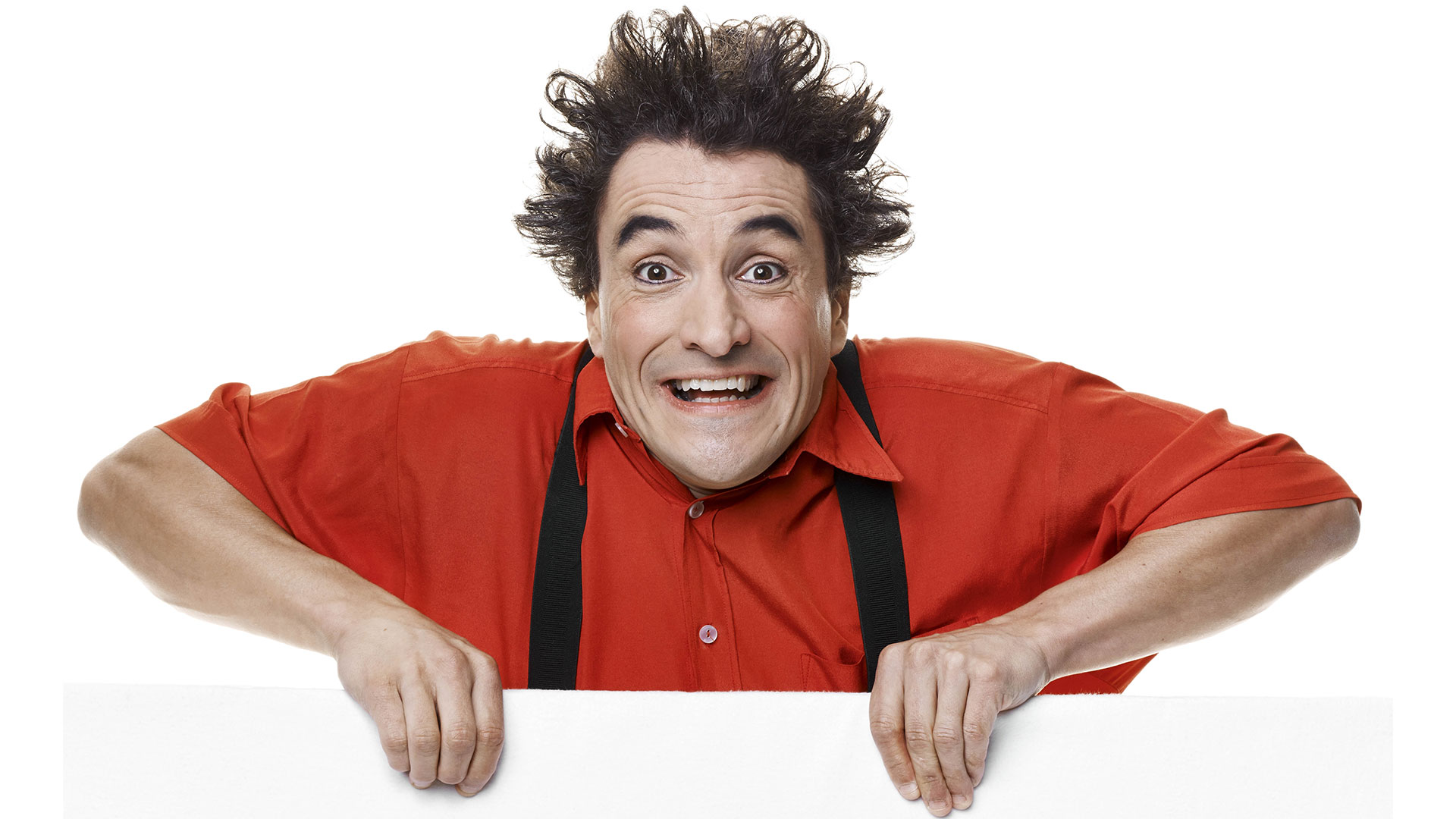 Elastic is the godfather of the Clownmania festival!

He will perform twice during the Clownmania 2021 festival, with his partner Francesca. Let's bet that the public present in the beautiful room of the Waux-hall will literally burst out laughing, both Saturday 3 at 8 pm and Sunday 4 July at 6 pm.

NB: The opportunity to see Elastic in real life does not often occur in Belgium. Even if Elastic is Belgian (Liège), he tours the whole year all around the world with his latest show: El spectacolo! 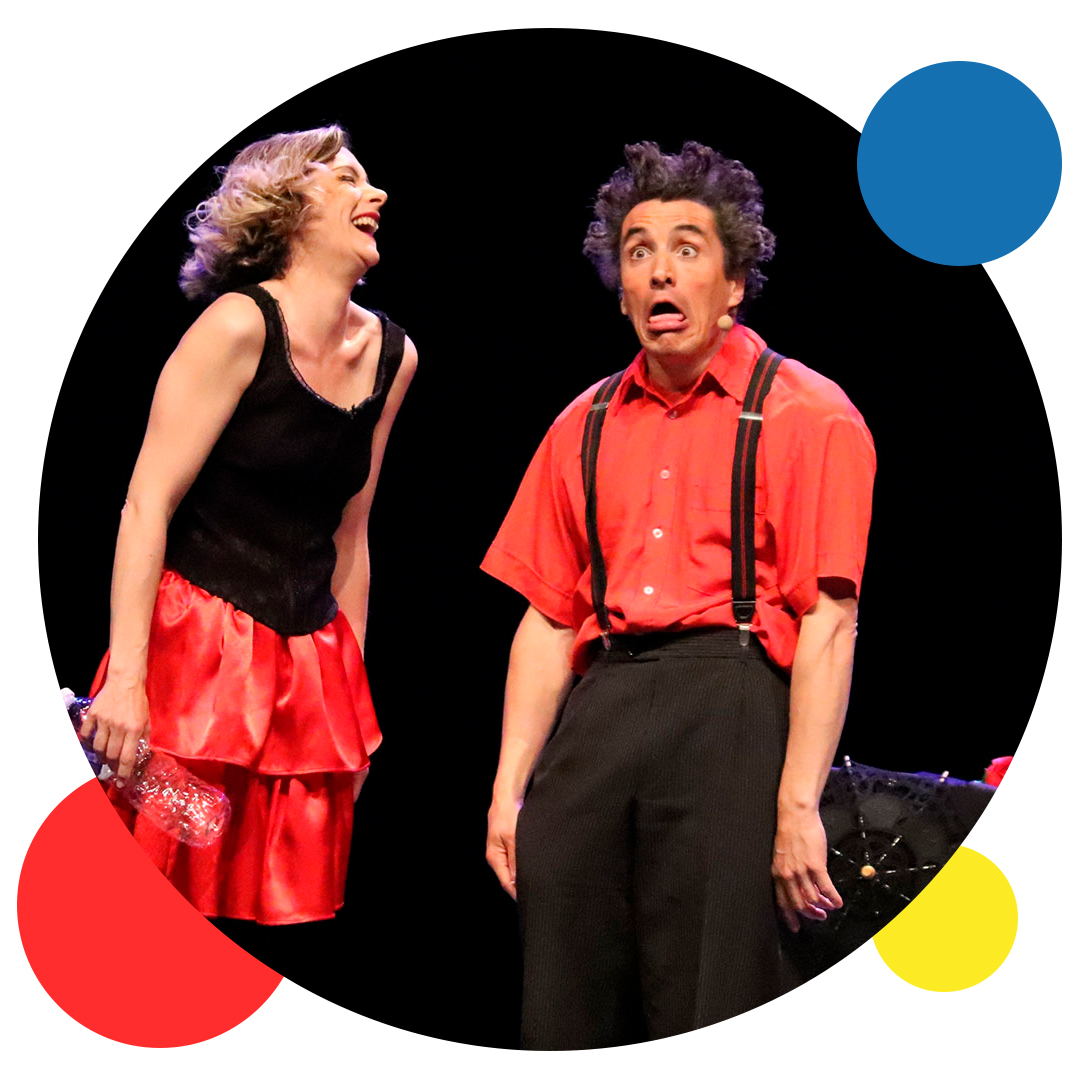 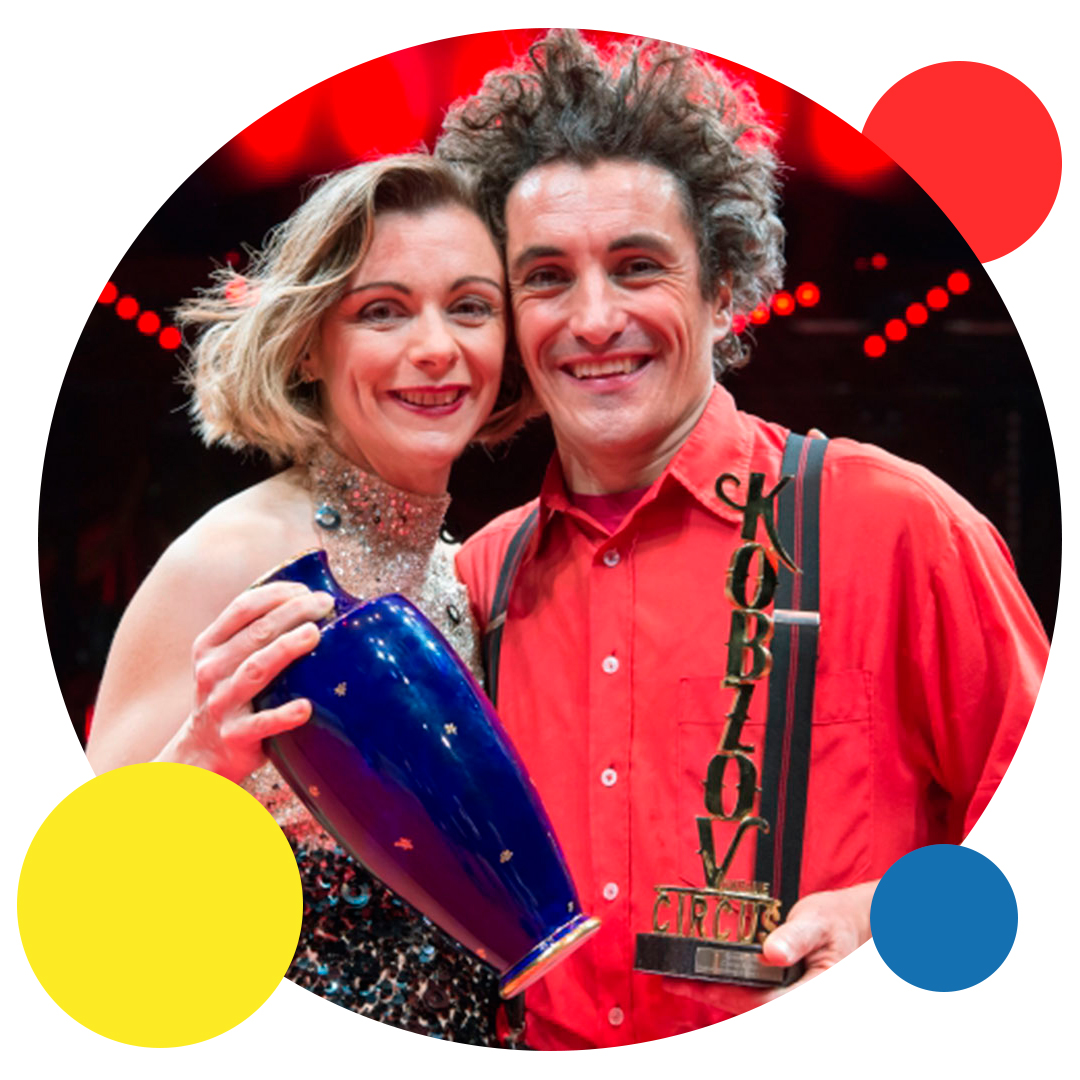 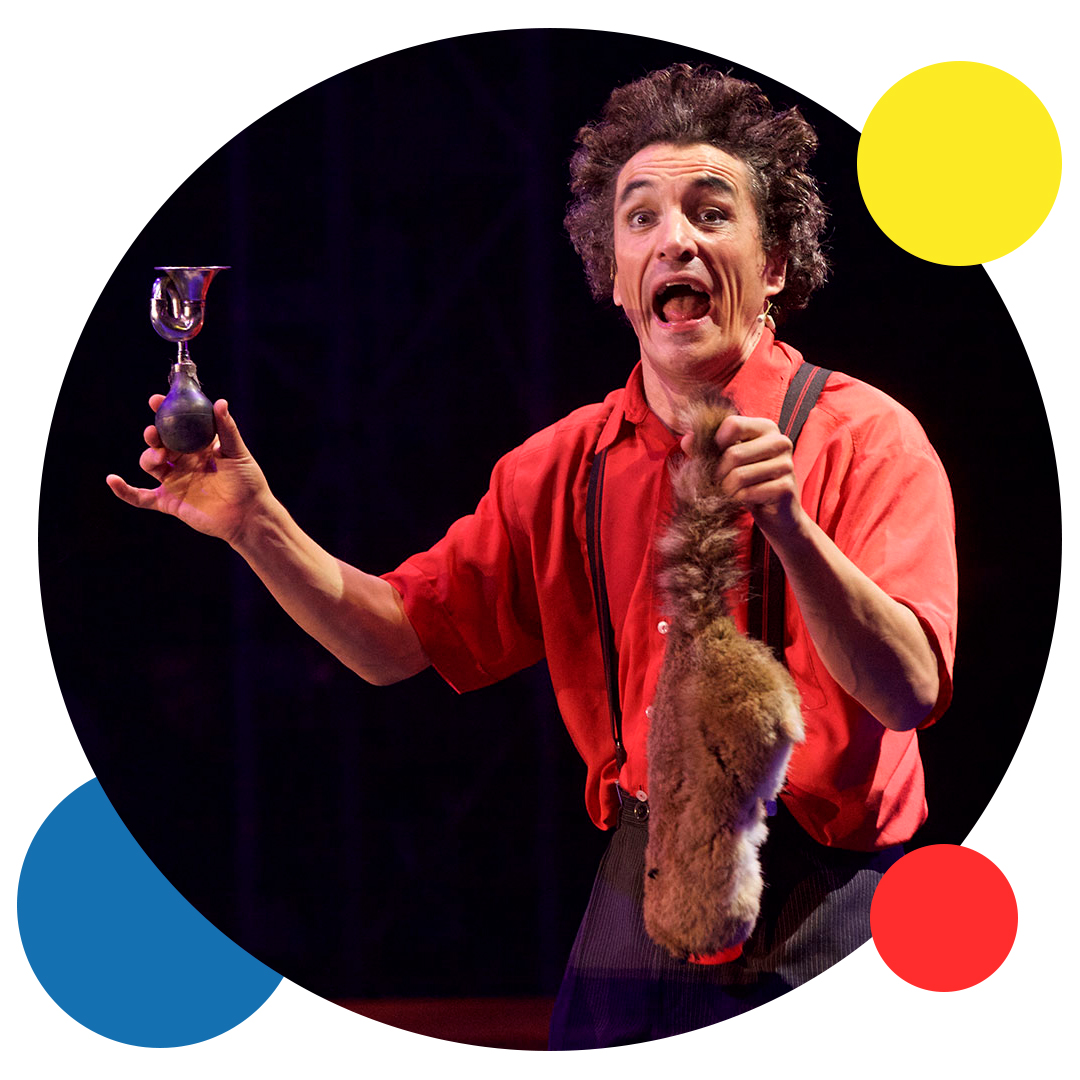 In English, it means "THE Show!". And for "THIS show" Elastic wants to surpass itself! For nearly 30 years on the road, Elastic has had a brilliant solo career and notably achieved great success with his shows "Artisto!" and "Momento!".

To help Elastic renew itself, the production has the bright idea of suggesting a magnificent assistant! Indeed, a feminine touch is essential! Then, Francesca enters the scene. The production believes that his presence will boost Elastic's various issues, as well as help him focus on his art to produce the best of himself. Chosen among the fans of the artist (failing to pay a professional), Francesca finds herself, to her delight, Elastic's regular assistant in "EL Spectacolo!" the show of her life... of their lives!

Come and discover how a pseudo great artist, assisted by a pseudo assistant, will transform, in spite of themselves, a pseudo great show, into a whirlwind of crazy, funny and clumsy moments at will. Which of the two will crack first in the face of the accumulations of blunders of the other? Which of the two will succumb to his feelings for the other? Who of the two is the real artist of this show? These two characters will touch you in the heart and tickle your zygomatics at the risk of bursting them! With accuracy, complicity, love, exploits, artistic performances and often with "a nothing", Elastic and Francesca take you in "EL Spectacolo!" Laughter guaranteed! This best-off of the best (and the worst) is a real potpourri of gags (and not the other way around), sprinkled with beautiful surprises... including playing with a partner! 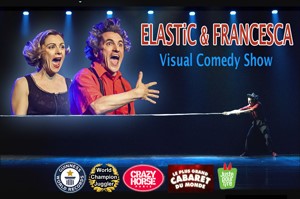 - Cabaret: the CRAZY-HORSE in Paris
- Tv-Show: THE LARGEST CABARET IN THE WORLD (4 passages)
- Just For Laughs Montreal Festival
- 44th MONTE CARLO INTERNATIONAL CIRCUS FESTIVAL - 3 Special Prizes
- GOLD Medal of the International Circus Festival of Saint-Paul-Lès-Dax
- PRIZE OF THE PRESIDENT OF THE REPUBLIC of the International Circus Festival of Massy (Paris)
- Bronze Elephant" from the MOSCOW WORLD CIRCUS FESTIVAL (Russia)
- A "GOLDEN BUZZER" in the TV show "Das Supertalent" — "Incredible Talent" in Germany.
- MILLIONS OF VIEWS on social media: YouTube —Tik-Tok (over a million subscribers!) —FaceBook

2015 is the year of the meeting between the great juggling artist Françoise Rochais, and the inimitable humorist Elastic. Together, they decide to share their lives, their travels, their scenes, their applause, their laughter and also their artistic cachets !!! Their complicity in life is quickly found on stage, their two worlds merging perfectly! Thus, at each performance, they receive the approval of a conquered audience! Since this beautiful meeting, these two artists with the respective long path of soloists do not deserve. Their duo has already hit the nail on the head by winning awards at several international festivals. Elastic (Stéphane Delvaux) is a clownish character, with an Italian accent, who with three times nothing, his universal language and a precise sense of gag, has been walking his audience through the world of circus and music hall for more than 30 years. Françoise Rochais (Francesca) is "World Champion" of juggling and is listed in the "Guinness Book" of records. A true reference in the world of juggling for 30 years, she has played in more than 30 countries. They have to their credit many television appearances, including 4 appearances in "The Largest Cabaret In the World". They have worked in cabarets such as: "Le Crazy-Horse" in Paris, at the "Wintergarten" in Berlin or at the "Hansa Théatre" in Hamburg as well as at the "Juste pour Rire" Festival in Montreal and in many other Cabarets and Variétés du Monde. Elastic and Francesca are an original and sparkling duo, rich in their love and connivance. In 2018, they created and went on tour with their show "El Spectacolo!". At the same time, they were distinguished at the Massy International Circus Festival (Paris) by winning the President of the Republic's Prize, the highest distinction! The phenomenon duo is also bronze medalist at the Nikulin World Circus Festival in Moscow and awarded at the Monte-Carlo International Circus Festival in January 2020.

Stéphane Delvaux (alias ELASTIC), originally from Liège, formed from 1986 to 1991, with his younger brother, a duo of clowns that they will present regularly throughout Belgium, with some televised passages and especially the first to be noticed and sponsored by the famous clown Annie Fratellini during the circus festival "La Piste aux Espoirs" in Tournai, where they won the "Bronze Track". In 1992, Stéphane left the duo and embarked on a single stage with a new universe, completely visual, but still under the pseudonym of Elastic who will never leave him. A pseudonym that sticks to his skin, as he plays with the elasticity of his face and body throughout his various shows. With this endearing burlesque character, his mastery of visual humor and clownish art, Elastic soon crosses borders. His humor and personality hit the mark, which is how he is awarded at various comedy festivals (Rochefort in Belgium, Laval in Canada, Tournon in France), makes some appearances on TV (RTBF "Signé Taloche", RTL-TVI, TF1), shoots for advertising spots and is noticed by the "Cirque du Soleil". Although he likes the stage, he takes advantage of the proposals made to him by taking a clever pleasure in performing under other skies, such as for "circus galas" or for "street artists' festivals" where success is always at the rendezvous: "I have a real pleasure to play in street festivals, because the contact with the public is indescribable and when you manage to hold around you sometimes up to more than a thousand people by the sole force of what you propose, then really you taste the happiness of sharing the show. Thus, since 2001, Elastic plays under the different suns of Europe with its show "The Gag Man" that hundreds of thousands of people have discovered and applauded in many street festivals and other gala evenings. In 2005, with his past experiences, Stéphane decided to create a show for the venue, entitled: "ARTISTO!" Brimming with generosity with his Roberto Begnini-style looks, the character of Elastic takes the audience for more than eighty minutes in a series of eccentric cabaret acts, a deluge of surprises and madness, exploits and poetry! In 2006, while presenting his show "Artisto!" in Belgium, he was spotted by Patrick Sébastien who fell under the spell of the artist, but also of the "little man" as he says! This is how Elastic is invited in the television show "The greatest Cabaret in the World" by Patrick Sébastien on France 2 on December 31, 2006 (rebroadcast, given the success of its passage 2 months later), as well as in the "Beest Off" of the most beautiful visual numbers of the year in August 2007.

Following this meeting, Patrick Sébastien offers Stéphane the first part of his show on the main stage of the "Casino de Paris". Then the contracts follow one another: Magic Congress "FFAP" of Angers where the whole profession reserves him a "standing ovation", televised passages in Spain, Switzerland, Turkey, Germany, Canada, again "The Largest Cabaret in the World on its 31", the "Crazy-Horse" of Paris, the Gala of the Festival "Juste Pour Rire" of Montreal, "Les Stars du Rire" on France 2, "Signed Taloche" in Belgium as well as a 2nd then a 3rd and a 4th passage in "The Largest Cabaret in the World"! After a show in Japan for the Daidogei Work Cup, the 2014 - 2015 season is the beginning of a new stage for Elastic. He embarks on a new indoor show called "Momento!" This new creation produced at the Festival d'Avignon is a great success. The daily "La Provence" calls it "a happy surprise of the OFF Festival".

Initiated into juggling at the age of eight by a professional in 1982, this hobby immediately became a real passion. Very quickly, she is noticed and at 10 years old, it is in Australia that she makes her first television appearance! All alone, she acquired experience throughout her schooling and continued to perform regularly. After winning multiple awards, including a silver medal at the Festival Mondial du Cirque de Demain (Avenir category) in 1989 in Paris, it was in 1991, with the baccalaureate in her pocket, that Françoise became a professional. Françoise Rochais masters her art to perfection. With an impressive track record, in 1995 she won the gold medal in Las Vegas, which placed her in the closed circle of the best in the world. In more than 50 years of mixed competition, she becomes the second woman to accomplish this feat. Continuing her path as a true self-taught, with a lot of will and tenacity, and after years of daily rehearsal, Françoise inscribed her name in the Guinness World Record for her juggling with 7 sticks in the year 2000 and still holds this record today. Contracts and television appearances (in China, Japan, Russia, Australia, the United States, France...) follow one another. Françoise obtained international recognition by working at the Wintergarten in Berlin, in various Palazzo — dinner shows of great renown (Amsterdam, Berlin...) and at the Hansa Theatre in Hamburg. In 2015, Françoise won the Bronze Medal at the Daïdogei Festival in Japan and was invited back the following year. In December 2015, she caused a sensation during her TV appearance on the Taloche Brothers' show "Signé Taloche" in Belgium and followed in 2017 with a TV appearance in Rotterdam. In October 2017, Françoise won the Silver Medal at the Festival de Cirque des Mureaux and began 2018 in style by receiving with Elastic the highest award, "The President of the Republic's Prize" at the Massy International Circus Festival. The duo won at the end of 2018 in Russia "The Bronze Elephant" at the Nikulin International Circus Festival in Moscow as well as 3 special prizes at the 44th Monte-Carlo International Circus Festival in January 2020. Françoise juggles with different accessories, including umbrellas, performing almost impossible combinations. Then, Françoise continues with her specialty: sticks. His breathtaking number is of great originality. An essential asset: her femininity, her charm and her talent in an almost exclusively male environment.